In 2019 Hong Kong has been in a state of sustained protest, posing the greatest challenge to Beijing’s control of the territory since the handover from Britain in June 1997. Demonstrators are opposed to the Fugitive Offenders Mutual Legal Assistance in Criminal Matters Legislation Bill, colloquially known as the extradition bill. Critics claim the bill will permit the extradition of political dissidents to be tried in Chinese courts, assuming they are first charged with a spurious non-political offence. Democracy proponents also fear it will weaken the peninsula’s greater independence under the “Two Systems, One Country” system guaranteed until 2047.

Resistance to mainland policy intensified in June and July, with protestors turning out in progressively larger numbers, attempting to blockade the Legislative Council (LegCo) building and calling the Beijing-appointed Chief Executive, Carrie Lam, to withdraw the bill. Following clashes with the police on 12 June, protests grew into the millions. This culminated in the storming of the LegCo building on 21 July. Although Ms Lam has announced a delay in the bill’s passage, she has refused to withdraw it. Activists now demand her resignation and full universal suffrage in the territory.

Security services have deferred a major crackdown for now, with pro-regime violence instead taking the form of civilian auxiliaries. This restraint suggests China intends to allow the protests to continue to mollify the population. In the absence of strong moral support from the US and UK, which are both distracted by internal divisions, Beijing expects that it will get its law in the end.

However, events in Hong Kong cannot be censored as on the mainland. News will leak out. If the Chinese government fears that situation is spiralling out of control and contagion is possible, a more heavy-handed response will follow.

Following clashes with the police on 12 June, protests grew into the millions. This culminated in the storming of the LegCo building on 21 July. 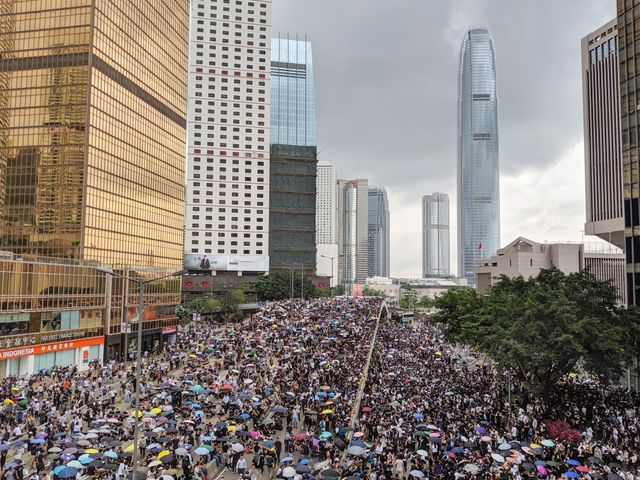