Autocrats who extend their tenures despite mass opposition are usually denied a dignified exit. Bolivia’s Evo Morales proved the rule with his forced resignation on November 10, which was followed by voluntary exile in Mexico, where he was granted asylum in the face of possible electoral fraud charges. Earlier in February 2016, the public had voted to bar Mr Morales and his vice president from standing for a fourth term in the October 2019 elections. The referendum was effectively annulled by a constitutional court ruling that rescinded all term limits in November 2017.

Mr Morales left office in response to mass protests questioning the validity of his victory after general elections on October 20. That evening, the vote count froze on the electoral system’s web site, and was later restored to show an unexplained uptick in support that allowed him to forego a run-off vote against his rival, Carlos Mesa.

Weeks after Mr Morales’ departure, Bolivia remains divided and gripped by deadly demonstrations. Jeanine Anez, the former second vice president of the Senate who was next in the line of succession following multiple resignations, is serving as interim president in advance of new elections that have yet to be scheduled. The next polls may depend on possible electoral reforms to ensure public faith in the outcome. In the meantime, the acting president has moved to reverse years of Morales’ Movement Towards Socialism (MAS) policy, including an overhaul of the military leadership and cabinet; the latter now contains no indigenous members. These changes have sustained indigenous support for Mr Morales, as well as a skepticism that minority rights will be upheld by a new government with a more convincing popular mandate.

Whatever the outcome of the next elections, Bolivia is likely to join its South American neighbours in an extended season of discontent. 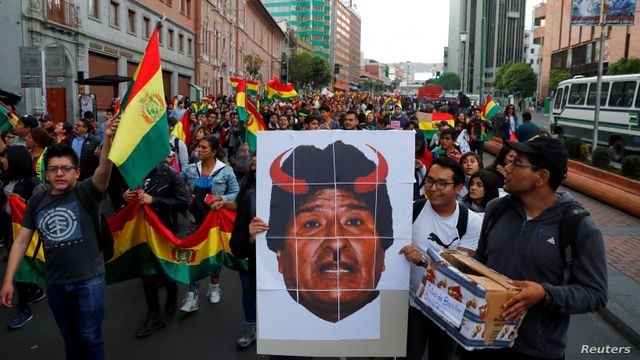