After weeks of a “Freedom Convoy” occupying central Ottawa in protest against a cross-border vaccine mandate, the government’s invocation of Emergencies Act gave it powers to break up the demonstration. The movement had blockaded key trade routes to the US, paralysing North America’s car manufacturing industry, intensifying supply chain stresses and costing Canada hundreds of millions in economic losses.

The tactics and branding of the convoy have already been mimicked internationally, serving as a rallying point for right-wing opponents of vaccine mandates and broader pandemic-related grievances. Using large goods vehicles enables a relatively small group to occupy strategic public spaces and project an outsized impression of their strength, while maximising operational disruption that draws attention to their cause. Copycat convoys in New Zealand, Australia, Belgium and France have emerged flying Canadian flags, while a “People’s Convoy” to Washington DC is being cheered on by American right-wing media. Canada’s convoy proved vulnerable to capture and co-option by more extremist right-wing groups, raising the risk of violent unrest.

Prime Minister Justin Trudeau’s successful use of the Emergencies Act may also embolden governments to mimic similarly heavy-handed legal tactics against aligned protest groups and vaccine holdouts. Fatigue towards pandemic measures cuts both ways, creating popular frustration with new restrictions but also with opponents of measures that would facilitate normalisation. Opinion polls suggest that large majorities of the public in Canada support both the mandates and the deployment of emergency measures. Hundreds of trucks looked impressive, but were misleading: over 90% of Canada’s truck drivers are vaccinated.

Appeals to a silent majority are attractive to governments approaching the end of vaccination programmes, but they run the risk of further radicalising dissenters. In Canada and the US, Conservative and Republican party figures alike have hyperbolically denounced Trudeau as an authoritarian tyrant, pushing the convoy’s demands into the mainstream. Even approaching the endgame of the pandemic, expect deepening polarisation and more disruptive episodes along the road towards a post-pandemic world. 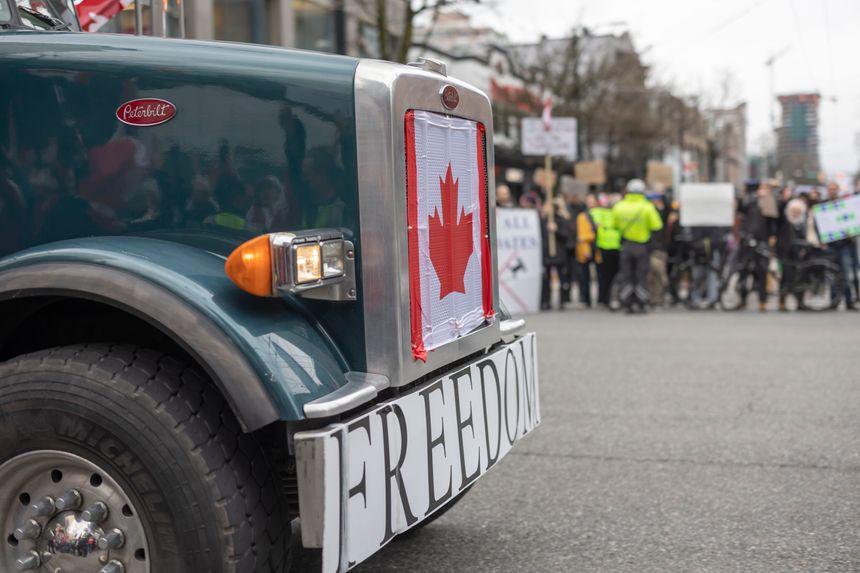